On March 19, 1882, the first stone of La Sagrada Familia was laid. The chosen day wasthe celebration of the feast of Saint Joseph the greatest inspiration was Josep Maria Bocabella, founder of the Association of the Devotees of Saint Joseph. During its first year, the works were not directed by Gaudí but by the architect Francisco de Paula de Villar. Gaudí, would arrive just a year later. And with him, indeed, came the change. Yes, Gaudí completely transformed the initial idea in the 43 years that he was leading the project. It went from one to eighteen towers and from one to three monumental façades.

What will a Basilica with 18 towers look like? Well incredible, right? Each facade will have four bell towers. And if we have told you that it will have three façades, the calculations easily bring us 12. You were right if you were thinking of one for each disciple. At the moment, as of today, there are already eight built, distributed between the Nativity and Passion façades. Did you know that Antoni Gaudí only saw one finished in life? 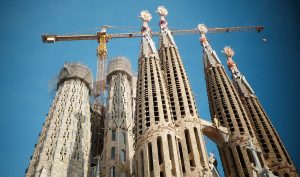 The Basilica, designed by Antoni Gaudí, received 4 and a half million visitors in 2019. The estimate of visitors for 2020 is, according to sources from the Sagrada Familia, 15%, about 680,000.

For the next few years it is expected that the tower on the apse, that of the Virgin Mary, those of the four evangelistsand that of Jesus, the highest with its 172.5 metres will be completed. By the way, as you can imagine this tower will be the tallest building in all of Barcelona and the tallest church in the world!

Since 2012 the works have been directed by the architect Jordi Faulí, who has been working on the project since 1990 and in 2009 received his doctorate with a thesis on the continuity and composition in the columns and vaults of the Temple of the Sagrada Familia. If you want to listen to the full interview in Spanish and the podcast of the Barcelonitis section of the radio program La Piecita del Fondo, click here.

What aspect of Antoni Gaudí’s architecture would you highlight as unique and genuine?

It is a synthesis architecture that is precisely what Gaudí was looking for. It should be noted that the constructions had to respond to functionality, use and a logical structure. In other words, it was an effective construction system where the bricklayer could feel fulfilled while working. Antoni Gaudí, like any good architect, thought about the people who would use the building: how they would live in it, how they would feel, that is, he even took into account the feelings of those who would use that building. He always said that original was to return to the origin in the sense of understanding how each space in a building had to be and its function. And all this he did from the harmony of creation. Therefore its source of architectural inspiration was nature itself. But he did not do it from imitation but from the search for innovative solutions.

What is the greatest challenge that an architect, who is in charge of the Sagrada Familia construction, currently faces?

The main one is to be faithful to the project that Gaudí left behind. He finished an important part of the Sagrada Familia: apse, crypt and facade of the Nativity and left us a lot of information to continue the project in the future. With more or less definition but essential for the whole of the building and the religious content. And he left important parts very well defined: large models, drawings and information to his collaborators. Therefore it is about being faithful to the maximum to all this information, understand it and make it constructible. You have to project the parts that Gaudí only sketched following his working method. Today, in addition, we have innovative current construction techniques and the use of technology.

From the year 1882 in which the works of the Expiatory Temple of the Sagrada Familia began, -1883 with Gaudí in charge- until the 21st century, could you explain how the way of building has changed?

Basically the materials we use are already those that Gaudí had proposed and used himself. On the Nativity façade we find reinforced concrete with colored coverings in Venetian glass and other materials. These are the same that we use now but with the technology of the moment. For the six central towers that are currently being built we use computer mechanization but with manual finishing. We continue to use reinforced concrete but with the possibilities of our time to provide greater resistance. We build with the technique of stressed stone, which consists of the introduction of stainless steel bars inside the stone pieces so that they have better resistance to compression. This allows the towers to better withstand future stresses and stresses from wind or earthquake. They are built with large stone panels that we mount outside.

When will the tower of Virgin Mary be completed?

We are working on it and, God willing, by the end of 2021 we will have the Tower of the Virgin Mary completed.

Can you venture to give an approximate date for the completion of the works?

At this time it is impossible to give a date. We are without visitors and without donations that are the source of funding so unfortunately I cannot give any date.